So today was a little tid bit of information out today, let’s just dive into and start with the DreamWorks panel. They released their upcoming schedule and it looks like we got some decent films coming our way. They first showed a short teaser for a film called Home. The plot seems to center around an alien race who attempt to take refuge on earth while hiding from their mortal enemy and make earth their new home. While attempting to relocate the humans, a young girl escapes and is accompanied on the run by a banished member of the alien race named Oh. Next up is a film called B.O.O. the Bureau of Otherworldly Operations. B.O.O. seems to center around a government organization that employs ghost to protect humans from hauntings. Two of the newest agents uncover a plot to destroy the organization and it is up to them to save the day. Finally, we get a little bit on the movie of the Penguins of Madagascar! Out came Comic Con virgins John Malkovich, and Benedict Cumberbatch. Apparently the Hall couldn’t help but ask Cumberbatch about the Dr. Strange rumors. To which he only replied maybe he’d be playing Nurse Normal. Funny guy. The three films seem fun. Penguins more than the other two.

Paramount took the stage next and dropped some major bombs. To start they announced a 2nd SpongeBob movie. Followed by the Ninja Turtles panel where they played some footage and talked about the film. Nothing new here. I haven’t seen many of the newer trailers and I’m pretty excited for the film. Next up they debuted the Hot Tub Time Machine 2 trailer. Which I will try to post at the bottom, don’t really know how. But it wasn’t anything special. Liked the first one, and you can’t judge a book by its cover, or a film by its trailer. There are a few funny spots, the nerd song, and the final clip.

Next up, well, I’ll get to what’s next. First they finished the Paramount panel with Interstellar. Matthew McConaughey and Chris Nolan showed up to discuss the film! I am very excited for this one, sadly I don’t think we get to see the trailer just yet, but from what I’ve heard it’ll be great. But now, Finally, The Rock has showed up at Comic Con! The Rock came out to apparently a tremendous ovation. He invited everyone to s special screening of Hercules, to which he was greeted by chants of Rocky, no, wait, it was another word, SHAZAAM! I think this entire Shazaam talk is misdirection. I think he’s going to be Black Adam. You don’t get the Rock, the most electrifying man in sports or entertainment and only let him on the screen half the time. 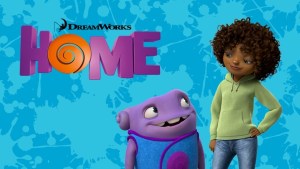 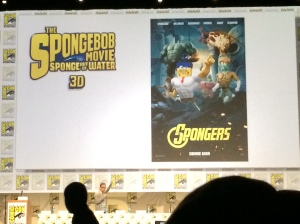 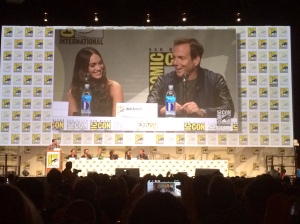 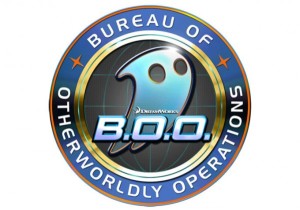 All pictures credited to SchmoesKnow.com