Chris Lemchi returns to the Jackass Nation to join BC for this week’s It Is What It Is. Chris and BC break down the big winners from the Oscars, as well as talk the controversary over who won, and who thought they won. They also break down how big of a opening movie month March is!

Listen to this episode by clicking here, or right click and save to download and listen later!

Do you shop on Amazon? Then click here and bookmark it to help support the Jackass Nation Podcast channel. You won’t be donating, or paying anything more then you normally would, but by clicking the link, and buying your normal products at no extra charge, Amazon will kick back to the Jackass Nation. It helps keep all the content on this channel free of charge for you!

Don’t forget to subscribe to the Offshoots Network on iTunes. Give them a 5 star review!

Get your Loot! Right here at LootCrate.com Enter “SCNSLive” at checkout for a 10% discount!

SCNS Live every Thursday night on Right here on you tube

Bookmark Cinelinx.com for all your movie news, reviews, editorials, and more!

Metroplex Wrestling is back!!!  Like us on Facebook at MPX Wrestling  to stay up to date on all our weekly shows!

Ok, so major news Saturday out of Comic Con, I know I am two days late, but there was a lot to talk about. So without any further au due, let’s get into it.

DC opened up with nothing but Batman v. Superman: Dawn of Justice. No rumored Shazaam info, no rumored schedule. Just pictures, and footage. The footage which is unable to be seen by anyone not at Comic Con, which is crap. But, I have a slight description. The footage allegedly opened up in Gotham, Supes is hovering in the air then on comes the Bat Signal. He glances down and it reveals Batman on a rooftop. Batman’s eyes glow blue revealing him to be in his tech armor, very reminiscent of Frank Miller’s the Dark Knight Returns. Supes eyes glow red and he flares up toward Batman and the footage ends. The film seems to take a lot of its cues from the graphic novel, which I think is a great idea. If you’ve read the novel The Dark Knight Returns or seen the animated film, you know how detailed and incredible that story is. From the announcement of the film with the quote from the graphic novel to this test footage, it’s been pretty clear what direction they are taking it. I for one am still not 100% onboard. I think Bat-Fleck is the best thing going for the film but it has its issues. The casting of Mamoa as Aquaman, great casting, but putting Aquaman in the film, unnecessary. Same with Victor Stone, AKA Cyborg. And for Wonder Woman, the casting of Gal Godat is horrendous. They have finally released an image of her, and yes, the costume looks phenomenal. Yes she is very hot. But I don’t by her as Wonder Woman. Yes she was in the Iraqi army, she just too skinny. Not to mention, she is not an actress. She is a model who acts. If you didn’t care to have a trained actress play the most iconic female superhero ever, why would not just get Gina Carano? That’s just my 2 cents. 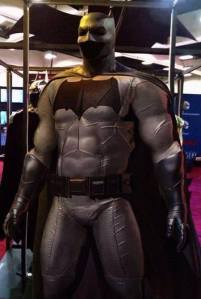 Next up we had Legendary. Legendary had two pretty big major announcements. Godzilla 2 will include more of our favorite monsters. Mothra, Rodan, and King Gidorah, AKA Monster Zero. I was in the camp of the not so thrilled with Godzilla. I felt they needed much more Godzilla in the Godzilla film. However, with the introduction of these three iconic monsters, I am back on board. Will they let me down? That remains to be seen. I will say though, historically, sequels give you more of what you want. Batman Returns more Batman, Terminator 2, more Terminator. So I assume that Godzilla 2, will give us more Godzilla. On a possibly related note. Legendary and Universal will be teaming up to give us what a teaser called Skull Island. Skull Island the legendary home of the iconic King Kong. Rumor has it that the film will give us an origin of Kong. How he back King of this island and the islanders began to worship him. As well that it will be taking place within the Godzilla universe. If this is true, it makes me even more excited that we could get King Kong Vs Godzilla later on down the road!

Warner Brothers also released a trailer and new poster for Mad Max: Fury Road. The film looks fun, Tom Hardy plays the title character and is definitely a good successor for Mel Gibson. It looks action packed, it looks like them going back and taking their time really paid off for them. I cannot wait to see this film!

WB also aired the Pilots of both Flash and Gotham. While most people have already seen the Flash pilot, The Gotham pilot was aired for the first time. Reception seems to be pretty positive. It is said to be much grounded in reality. Not being a Superhero television show, but a cop drama. Even characters like Robin Taylor’s Oswald Cobblepot, and Corey Michael Smith’s Edward Nygma are believable. The Arrow panel seemed to be the most fun with them showing an extended trailer for season 3. Looks like we will be upping the action and drama. Ra’s Al Ghul will apparently be making his long anticipated debut. They spoke of the crossovers that will take place between Flash and Arrow. Most notably Felicity’s presence on both show. The Constantine panel answered a few questions and also showed an extended trailer. Needless to say, DC is on top of their TV game.

I don’t know if there was a full panel, or not but at some point this weekend this image of The Thing pre CGI from the Fantastic FOur reboot surfaced. Looks about the same as The Hulk from the Avenges. First bit of good news in a while coming out of this film.

Finally, the bread and butter, the winner of Comic Con, in my opinion. All though they did not announce any of their untitled projects, Marvel did give us a lot. Evangeline Lily will be playing Hope Van Dyne, daughter of Michael Douglas’ Hank Pym. Will probably be Paul Rudd’s Scott Lang’s love interest. Corey Stoll will be replacing Patrick Wilson as Darren Cross AKA Yellowjacket. Plot seems to revolve around Pym and Cross being business partners. The Ying and Yang of the business. Cross seems to be the one who wants to take the company in an evil direction while Pym is out to help mankind. Seems as Pym will recruit Lang to take his place and become the Ant Man.

Marvel brought out the Avengers and they answered some fun questions. Hemsworth was asked where he would like them to take Thor, to which he replied “I’d like to see them turn him into a woman”. Ruffalo joked about how he used to be nobody now he walks down the street and has a name, everyone yells “Hi Hulk”. All he pieces of the puzzle have been released and they create an amazing picture of the Avengers all being over powered by Ultron Drones. Most notably The Vision appears in the background in the top left corner. Finally they showed some footage. Do you remember the photo released a about a week ago with the Avengers all hanging out in plain clothes in Avengers Tower? Well the apparently the footage opened up there will all the Avengers joking and hanging around trying to pick up Mjolnir. Stark can’t do it, not even with an Iron Man glove or help from Rhodey, Banner can’t move, then Cap steps up to the plate and it budges just a little and they all go nuts. That is until a ruffling is heard and out walks a damaged Iron Man suit, that begins to speak of the extinction of the human race, and that he is the Ultron. A montage of action footage rolls, including Black Widow in her new outfit, Banner in a strait jacket, tanks being thrown. The footage ends with the Avengers laid out in a desolate desert. The Hulk raging out, then in comes Iron Man, in the Hulk Buster gear. The two go at it and the footage ends. I don’t know about you, but just the mere thought of how this looked gives me Goosebumps. I am so excited for next year!

To end Marvels panel they brought out James Gunn who revealed that Guardians 2 is coming. Says a lot for the studio to green light the film before the first has even been released. Guardians of the Galaxy is my most anticipated film of the year and I cannot wait to see it this Thursday night!!!!